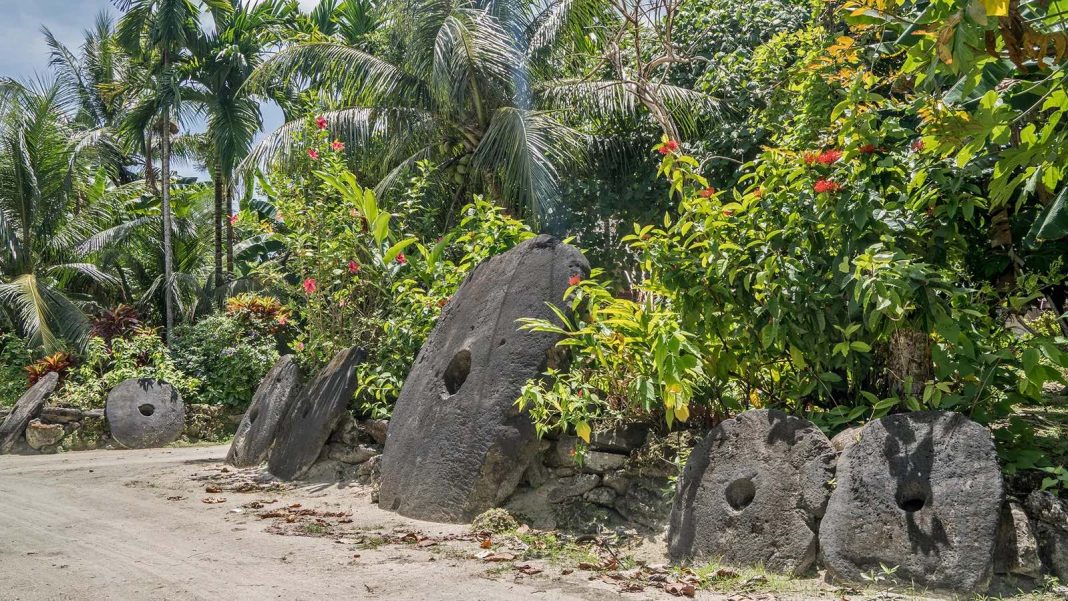 There are few systems of currency in the world more unique and intriguing than the Rai stone circles located on the tiny Western Micronesian island of Yap.

These donut-shaped limestone circles measure up to 4 meters in diameter – although they come in various sizes ranging from a biscuit to a backpack, or even a pickup truck.

We would like to think the O-like shape of these circles were inspired by the ‘O’ in ‘OVEX‘. Alas – they were fashioned as such for ease of transport. A large log could be inserted into the drilled hole and used as leverage. Nevertheless it would still take up to 30 men to move these giant pieces of earth.

The local people of Yap (aka the Yapese) value each stone circle based on a number of attributes. Namely the stone’s size, it’s mesmerising sheen (a property typical of limestone), the danger involved in transporting said stone across the pacific ocean and lastly the stone’s age (older stones were considered more valuable).

Carved from limestone in the 17th century from quarries located in the Palau islands some 400km from Yap, they are the largest objects ever moved over the open Pacific Ocean during the pre-European contact era. Many Yapese died making the treacherous voyage with these heavy stones on their otherwise ill equipped boats.

The stones were so huge, in fact, that given their sheer size, weight, and relative fragility, they were not typically moved once finding their place of rest on the Island of Yap. If a Rai were ever gifted or exchanged, the new owner(s) of the disk may not have even lived in close proximity to it.

This might make Rai sound pretty useless as a form of money. Quite the contrary. The local community maintained an oral ledger surprisingly effective in keeping track of whom owned which hunks of immovable limestone.

This orally ‘distributed ledger’ perturbed the Western world – amazed at how most villagers knew who owned what and where and when said ownership was transferred. There are interesting similarities between distributed ledger technology (aka the blockchain) supporting cryptocurrencies and the Rai.

The Rai did not require any central authority to keep track of transactions and ownership or even to distribute the stones. Instead all villagers agreed (albeit orally) on who owned what. This made it hard for any single villager to lie about his Rai wealth.

This narrative prompted archaeologist Fitzpatrick and Business Professor McKeon to put together a study that investigates whether Rai were, as a record of value, “an exemplary ancient analogue to blockchain”.

The Rai, like Bitcoin, commanded value because of their perceived scarcity. These limestone discs had to be excavated, fashioned and transported across miles of ocean before landing on Yap. Bitcoin too maintains perceived scarcity as a result of its hardcoded 21 million supply cap. Bitcoin is a decentralized digital currency that doesn’t require a central authority, like a bank, to process and/or verify transactions. To keep track of transactions, each and every Bitcoin exchange is encoded into a public transaction ledger known as the blockchain (not too dissimilar to the oral ledger the Yapese maintained).

Bitcoin’s ‘blockchain ledger’ bears one significant difference to the Yapese ‘oral ledger’. It is immutable. Immutable transactions on the blockchain means it is impossible for any entity (for example, a government or corporation) to manipulate, replace, or falsify any of the data stored on the network. Since all historical transactions can be audited at any point in time, immutability ensures an extremely high degree of data integrity.

For the Yapese – transactions are verified collectively by everyone within the community and all transaction histories are available for everyone to see (or rather discuss). Since shared knowledge and communal faith in the currency is at the heart of Rai stone it is not too far-fetched to consider the people of Yap to be the OG Satoshi Nakamoto’s.

The demise of this ancient stone money, however, came as a result of ‘hyper(Rai)inflation’. The Western world with profiteering motives sought to curry favour with the Yapese by modernising the quarrying and finishing of Rai. This resulted in an oversupply of the once rare stone. As a result the Westerners managed to debase the island’s currency – destroying the Rai’s once prized value. A hard lesson many of the world’s economies have relived in recent times as a result of reckless monetary policy.

Solend and the Whale