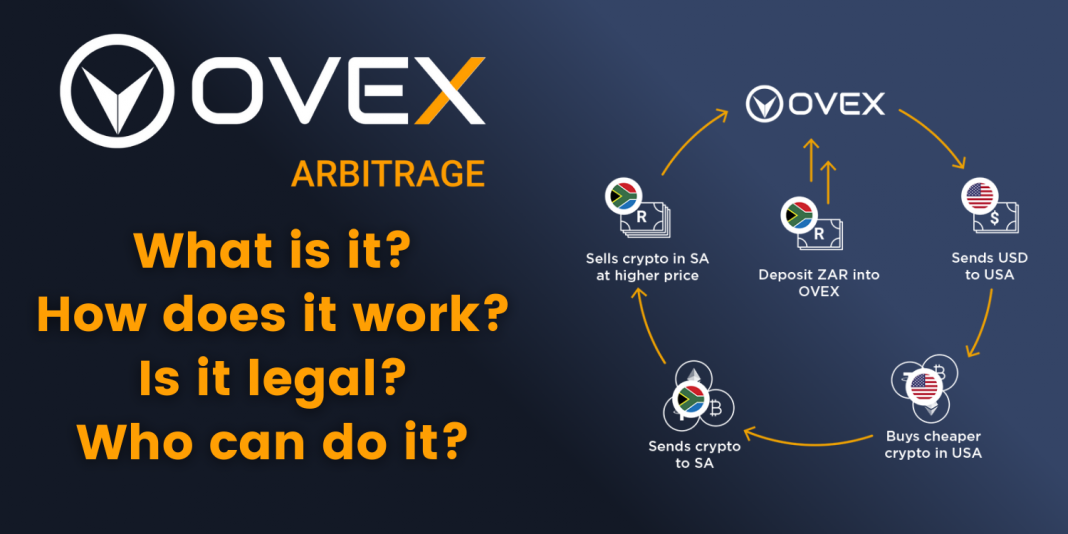 There has been a lot of investor hype surrounding South African cryptocurrency arbitrage as of recent.  For many crypto veterans this concept is nothing new and something they have actively taken advantage of since Bitcoin’s inception.

Now crypto arbitrage has arguably entered ‘mainstreamification ‘in South Africa and has many scratching their heads. Is this legal? Are the SARB aware of this? Is my money safe? Do not fear. Let OVEX give you the inside scoop – plain vanilla.

WHAT EXACTLY IS CRYPTOCURRENCY ARBITRAGE?

Cryptocurrency arbitrage is not dissimilar to any arbitrage trade. You buy an asset in one market at a discount and sell the same asset in another market at a premium – profiting off the price discrepancy of said asset in the two markets.

As an arbitrageur you are not forced to make a bet on movements in the market, so the risk involved is marginal. Instead you merely exploit market dynamics. Whether the market goes up, down or sideways is irrelevant – the inter-market dynamics prevail.

Over the past four years local ZAR cryptocurrency markets have traded at an average premium of between 3 and 5% when compared to offshore USD markets. This is known as the ‘arbitrage premium’.

South African crypto investors will take advantage of this fact by buying cryptocurrency on an offshore exchange – say Binance. Then sell this crypto on a local exchange like OVEX and profit off the price discrepancy in the USD vs ZAR market.

An amazing development in this space is the rise of Auto-Arbitrage services. OVEX have a service in which investors can deposit funds and let OVEX’s expert trades do the rest. This has made arbitrage trading so easy and accessible to novice crypto investors.

WHERE DO THE RISKS LIE IN AN ARBITRAGE TRADE?

An important notion when arbitrage trading in any asset are the costs involved in executing said trades. These ‘transaction costs’ so to speak cannot be too high or your arbitrage trade may go into negative territory. In laymen’s terms; if the cost of importing cheap oranges from Brazil to sell them at more expensive SA orange prices were so high that, when all is said and done, SA oranges turn out to be cheaper than their Brazilian counterpart, your arbatunity (excuse the pun) has failed.

When it comes to cryptocurrency arbitrage these ‘transaction costs’ are the fees involved in buying cryptocurrency on an offshore exchange and then selling these on a local exchange. At the time of writing – Binance and Luno both wage a 0.1% market taker fee to execute trades. This ‘cost of trading’ must be factored into the ‘arbitrage equation’.

Over and above these trading fees arbitrageurs need to consider, and navigate, movements in the price of the traded cryptocurrency – referred to by veterans as ‘market risk’.

Market risk arises as a result of something called a trade lag (i.e. the time it takes to buy the crypto offshore and sell it locally).

If, for example, you buy BTC offshore and by the time you manage to sell it locally, the price of BTC drops significantly – you may wipe out your arbitrage profits and even trade at a loss. This is why timing is of utmost importance when engaging in crypto arbitrage.

HOW DO I AVOID THESE RISKS?

The cryptocurrency exchange, OVEX, has something called a fully hedged arbitrage service. This is because OVEX has developed a product that eliminates market risk for its arbitrage clients.

Sounds too good to be true right? The short answer, No.

The long answer: There are 3 systems in place which ensure the OVEX Arbitrage Service is shielded from any market risk:

The OVEX Arbitrage Service enables South Africans to profit off the price discrepancy of TrueUSD (TUSD) in the U.S. and SA.

TUSD is a well-established stablecoin that has a market capitalization of $1.21billion. It is pegged 1:1 to the U.S Dollar – which means the movements in its market price are far more stable and predictable than an otherwise volatile and oftimes unstable BTC.

The arbitrage gap in TUSD (between overseas and local exchanges) is virtually identical to that of BTC. It can be shipped anywhere in the world in minutes, rather than the hour or so it takes for BTC.

TUSD’s focus on compliance and transparency have made it a solid contender when compared to other stablecoins. TUSD is also fully fiat-collateralized, meaning every token minted is backed by an actual US Dollar. The US Dollars held are verified by an independent third-party accountant that publishes monthly attestation reports. This is what makes TUSD a trusted and safe stablecoin provider.

Instead of having to open up a wallet with a foreign entity (like Binance), OVEX customers can engage in crypto arbitrage all through one platform. This is because OVEX have a direct partnership with TrustToken – the company that mints TUSD tokens.

This means arbitrage clients can buy TUSD directly from TrustToken at the exact market rate (no spreads) and have this credited into their OVEX wallet to sell at the local SA premium. What’s more this entire process is automated. Neat right?

This means OVEX can buy and then sell the TUSD BEFORE clients funds (to purchase said TUSD) clear. This credit line that OVEX extends to its clients means OVEX arbitrageurs are empowered to profit off the highest yielding arbitrage premiums as and when they arise – not when funds are available.

The liquid balances mentioned in point (2) also mean OVEX can execute arbitrage trades at an instant. They can buy and sell instantaneously. No trade lags.

And there you have it – market risk eliminated.

WHAT IS MY ANNUAL SDA AND FIA?

You can only generate returns from cryptocurrency arbitrage in South Africa within the threshold of the South African Reserve Bank’s capital control allowances. These include your Single Discretionary Allowance of ZAR1million and your Foreign Investment Allowance of an additional ZAR10million.

Why? Because to purchase cryptocurrency offshore you have to externalize your Rands. The SARB controls exactly how many Rands you can externalize per calendar year. These allowances are put in place to protect the Rand from exchange rate volatility and depreciation.

The SARB is indeed aware of South Africans externalizing Rands for the purpose of engaging in cryptocurrency arbitrage. They are also current with the role OVEX plays in this regard. OVEX takes its compliancy as an exchange very seriously and only trades clients within their allocated thresholds.

The ZAR1million SDA is yours to use at your own discretion and thus does not require any clearance from government whatsoever.

The additional ZAR10million FIA can only be accessed with a Tax Clearance Certificate (TCC) from SARS so that the SARB is up to speed with why exactly you are moving Rands (over and above your SDA) out of the country. OVEX tax practitioners can facilitate the process of applying for FIA from SARS on the clients behalf.

HOW DO MY INVESTMENT ALLOWANCES GET USED UP WHEN ARBING?

Let’s make use of an example: Say you were to invest R100K in the OVEX Arbitrage Service. In this case, if you were to use up your full ZAR11million allowance (that is the ZAR1million SDA + the ZAR10million FIA) you could make 110 trades only before your full allowance is expunged.

If your arbitrage profits were re-invested it would take less than 110 trades to use up your full investment allowance.

Arbitrage profits, unfortunately, are not considered a permissible Source of Funds (SoF) for the purpose of arbitrage – so these cannot be re-invested. Instead they are paid out into your OVEX wallet in TUSD after every trade.

After the 110 trades have been executed your allowances for the calendar year would have been used up. See you next year fellow arbitrageur.

WHAT ARE THE RETURNS?

The returns per arbitrage trade have historically varied between 2-3%. This is after OVEX takes its fee for trading on your behalf.

On average OVEX loops (trades) twice a week resulting in a mean return of 4% per week on your money. This 4% is not compounded, because, as mentioned previously – arbitrage profits cannot be reinvested.

Let’s make use of an example:

The more you invest – the more you stand to make. Why? Because the higher the capital allocation – the fewer trades needed to reach your allocated allowance – which means you are exposed to less of those nasty little trading costs.

If a married couple were to use their full allowances for the year in the OVEX Arbitrage Service the two love birds could possibly net 2% of ZAR22million. This is ZAR440000 per calendar year in what is essentially a risk free investment.

OKAY SO NOW IT REALLY SOUNDS TOO GOOD TO BE TRUE

There is a caveat. You can only access as much FIA as you have liquid funds on hand. This means SARS will only grant you a TCC (Tax Clearance Certificate) to the tune of what you have in liquidity (like cash or equities). Once you have traded up to that amount, you have to reapply using the same liquid funds as standing. Then rinse and repeat. OVEX will only apply for FIA for clients with liquidity > ZAR250K.

So after you have used your full SDA for the purpose of arbitrage trading, if one wanted to ensure their full allowance is used within the calendar year – the arbitrageur should begin TCC applications immediately. Because, unless you have R10million in liquid funds lying around, you are going to have to apply for more than one TCC which takes time.

WHAT DOCUMENTATION IS REQUIRED TO INVEST IN CRYPTO ARBITRAGE

The documentation required to invest in cryptocurrency arbitrage include:

When purchasing cryptocurrency offshore it is required, by law, for banks to verify the source of the funds invested. This is to prevent money laundering and to counter terrorism financing. This formality is also put in place to ensure that you are using your own Rands and not someone else’s when expending your foreign investment allowances. This is a non-negotiable – so be sure you have the appropriate documentation proving the source of your invested funds.

WHAT ARE THE REQUIREMENTS TO QUALIFY FOR THE OVEX ARBITRAGE SERVICE?

To qualify for the OVEX Arbitrage Service you must meet the following prerequisites:

And there you have it. You are now an expert in cryptocurrency arbitrage. At the very least in your mothers’ eyes. Go forth and arbitrage cryptos with peace of mind *cough at least when you use a white glove service like the one at OVEX.

How to make passive income with cryptocurrency

How Stablecoins Differ From Foreign Currency