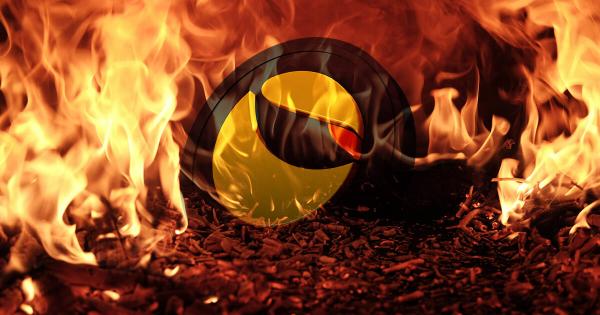 Terra’s blockchain accounted for $29 billion of the total $202.6 billion locked before it went belly up. Prior to its demise Terra Luna boasted the second largest TVL in DeFi backed by a notoriously fervent community known amongst themselves as #LUNAtics.

The total supply of $LUNA went from about 345 million tokens on May 10 to about 6.5 trillion only 6 days later.

Why did this happen? 🤔

$UST (the algorithmic dollar stablecoin responsible for this mess) maintains its peg through a price burn mechanism supported by $LUNA. In short:

For perspective: If you had $1million in $LUNA only 17 days prior it would be worth a mere $100 today. Unfortunately this was a harsh reality for many.

In late March of this year, when Terraform Labs seemed unstoppable, project leader Do Kwon (aka stablekwon) laid out a plan to buy $10 billion worth of Bitcoin and other crypto assets through the Luna Foundation Guard (LFG) in order to backstop $UST in the event of a depeg crisis. One significant problem remained; UST is not fully collateralised. This in contrast to the world’s other top 5 stablecoins. Before the collapse the market cap of $UST was around $18 billion — a value far greater than the mere $4 billion LFG had in reserves. Terra deployed all of their $3.2 billion reserve of digital assets to backstop the peg — but to no avail. This has left almost nothing to compensate traders following the collapse. UPDATE: South Korean authorities are now on the lookout for Do Kwon whom seems to have disappeared.

Max pain was felt by Terra users whom had troves of $LUNA locked in staking protocols. These were forced to watch their wealth literally dissipate before their very eyes as they sat helplessly with no means of unlocking their staked $LUNA.

What about the decentralised applications (Dapps) built on Terra? After claiming third place as DeFi’s largest application (in terms of TVL) Anchor (a saving/lending protocol built on Terra) has dropped to 58th place. This as frenzied users withdrew their staked $UST at an unprecedented rate. Within the week Anchor had lost 97.76% of its TVL.

Since Terra’s fall from grace alternative blockchains are stepping up to the plate. Notably so is market incumbent Ethereum; which saw its dominance rise by 8% in the aftermath of this market upheaval.

From the ashes dedicated builders will advance with with more resilience than before having learnt from the costly mistakes of predecessors. The future of crypto is bright 💡

Solend and the Whale

The Colossal Collapse of UST